When you travel first class, there are many aspects of the journey that go beyond 600 thread count sheets and Kobe rib eye. Gaining a knowledge of the people and the culture truly sets apart the traveler from the tourist. Thats why we bring you a closer understanding of the local flavor and indigenous roots of the people that you will be visiting. 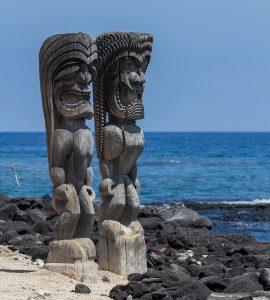 The “Big Island”of Hawaii is a perfect example of a place where you can explore the vestiges of ancient civilizations and enjoy a five star experience.  In Holualoa, just south of Kona lies the historic Hawaiian village Pu’uhonua or “City of Refuge”.  “Up until the early 19th century, Hawaiians who broke a kapu (one of the ancient laws) could avoid certain death by fleeing to this place of refuge or puʻuhonua. The offender would be absolved by a priest and freed to leave.  Defeated warriors and non-combatants could also find refuge here during times of battle. The grounds just outside the Great Wall that encloses the puʻuhonua were home to several generations of powerful chiefs.” 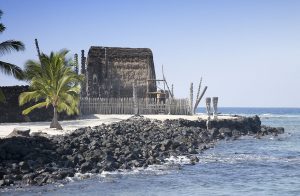 At Pu’uhonua o Honaunau, a large wall marks the division between the royal grounds or Honaunau and the refuge quarters or Pu’uhonua. The royal grounds of Honaunau descend from the slope of Mauna Loa to the ocean, which provided the 13th century village with optimal land for farming. The location of the royal quarters on Honaunau Bay also gave residents access to fresh drinking water. Servants caught fish from the 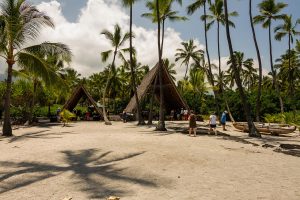 royal pond to serve the village ali’i (chiefs). Residents had access to the resources they needed, but travel to and from the island was not possible for villagers who did not belong to the royal court. Chiefs and their attendants were the only inhabitants of Honaunau who could use the canoe landing on the beach. To prevent villagers from using the canoes or leaving Honaunau, Ki’is (wooden images) stood around the temple of Hale o Keawe to caution residents against defying the kapu.” (From the National Parks Site) 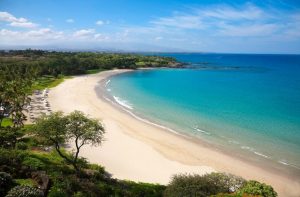 resort. In 1960 Hawaii’s Governor William Quinn invited Laurance Rockefeller to visit the Big Island and scout beachfront sites for potential resorts. A noted conservationist and lover of the outdoors, Mr. Rockefeller believed that buildings should conform to, not intrude on, beautiful natural surroundings. As they flew over the white sand crescent of Kauna‘oa Beach, Mr. Rockefeller asked if he could go in for a swim. From the water, he looked upslope at the towering summit of Mauna Kea and was inspired to create a great hotel that reflected the spirit of this special place.” 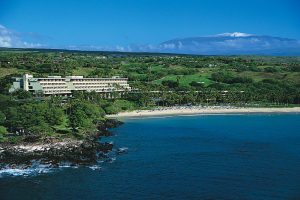 “When it opened in 1965, The Mauna Kea was the most expensive hotel ever built at the time, at $15 million. Praised by travel writers and critics worldwide, the luxury resort hotel was named one of the “Three greatest hotels in the world” by Esquire magazine, one of “10 best buildings of 1966″ by Fortune, and presented with an honors award by the American Institute of Architects.” “The original concept for The Mauna Kea luxury resort was a cluster of individual cottages along the beach-with no televisions or air-conditioning to interfere with the natural experience. In 1967. The “exorbitant” room rates started at $43, including breakfast and dinner in the Pavilion, which featured rotating menus of international cuisines.” 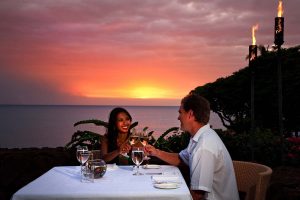 Times have changed and things are always “improving”. “Following a $150 million renovation, the luxurious Mauna Kea Beach Hotel reopened in December 2008. With a fresh new expression of the unmistakable Mauna Kea style.” Nowhere is the blending of the old and new more visible than when you choose to dine at the Mauna Kea. There are five restaurants ranging from the casual to the fine dining experience. Travel first class and have an amazing grilled bone in, rib eye Paniolo steak with Hamakua Ali`i style mushrooms at the Manta or experience a traditional Hawaiian luau with imu-roasted kālua pig, fresh island fish, laulau pork wrapped in taro leaves, lomi salmon, sashimi and piles of pineapple, papaya, and more. Learn the joy of finger-licking poi, dancing hula to the “Hukilau” or being wowed by the fire dance.”
Of course you will have access to the Mauna Kea Spa which offers a combination of Balinese and Hawaiian-inspired therapies. You can choose from a variety of massage, body treatments, aromatherapy and skincare services. There are  five luxurious treatment rooms including a couples suite with balneotherapy. 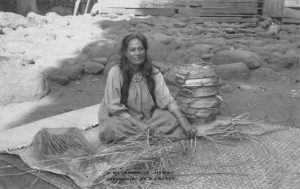 You can immerse yourself in traditional Hawaiian activities and learn how to weave lauhala, make a flower lei, dance the hula and fish with hawaiian throw nets. You can also play Paniolo horse shoes and Makahiki games. Paniolo is  the traditional name of the Hawaiian cowboys and Makahiki is the ancient Hawaiian New Year festival, in honor of the god Lono. 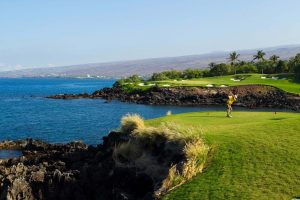 Of course Mauna Kea has one of the finest golf courses in the world. “The stunningly beautiful and award-winning Mauna Kea Golf Course, created in 1964 by Robert Trent Jones, Sr. on a previously barren black lava field, remains an all-time favorite in beauty and design. The elevated, undulating greens and prevailing coastal winds demand accuracy. The challenging course offers stellar coastal views as it tumbles across seaside cliffs. Some holes play right alongside the ocean – or across it.”

When you’re visiting the Kona coast you can’t help but travel first class and experience the finest resorts, the most amazing beaches and cultural landmarks that add to your enjoyment and pleasure. Stay tuned for more stories about this wonderful part of the world.