Since 1978, the average space between economy class airline seats has been shrinking. Airplane headrests are the latest technology designed to provide you comfort when you travel. Here’s how to deal with “The Incredible Shrinking Airline Seat”.

Its no secret that airlines are trying to pack as many people as possible onto a flight and charge them for every little amenity possible. Baggage fees that were instituted when gas prices were high have not been eliminated since gas prices have dropped. Meals and snacks now require an extra charge. Airlines are even considering charging for in plane bag storage in the overhead bins! Nowhere is this more apparent than the case of the “incredible shrinking airline seat”. According to Representative Steve Cohen of Tennessee “Seats were 18 inches wide before airline deregulation in the 1970s and have since been whittled to 16 and a half inches, he said, while seat pitch used to be 35 inches and has decreased to about 31 inches.” Now they’ve even come up with the term “Premium Economy” to charge you extra for the old seating configuration!

The problem has become so acute that there was a court case brought regarding not the comfort of the smaller seats but the safety. In a recent decisions “An appeals court panel said Friday (7/28/17) that federal officials must reconsider their decision not to regulate the size of airline seats as a safety issue. One of the judges called it “the Case of the Incredible Shrinking Airline Seat.” The Flyers Rights passenger group challenged the Federal Aviation Administration in court after the agency rejected its request to write rules governing seat size and the distance between rows of seats. On Friday, a three-judge panel for the federal appeals court in Washington said the FAA had relied on outdated or irrelevant tests and studies before deciding that seat spacing was a matter of comfort, not safety.”[2]

So, not only are the smaller seats less comfortable but they are a safety hazard as well. Anyone who has tried to pry themselves out of the middle row knows that it isn’t easy getting in and out of the seats. The problem has come to the attention of the U.S. House of Representatives. “The Seat Egress in Air Travel Act, (SEAT Act) unveiled in early March, would direct the FAA to establish minimum standards on the width of commercial aircraft seats as well as the distance between rows. The bill was introduced in the House by Rep. Steve Cohen (D-Tenn.), a member of the Transportation and Infrastructure subcommittee, and by Rep. Adam Kinzinger (R.- Ill.).” [3]

While everyone is concerned about safety, the real reason everyone is so upset about the “incredible shrinking airline seat” is that its uncomfortable! The smaller seats make traveling much more difficult. Getting in and out is harder and once you’re in your seat you can’t lean back, you can’t lean side to side so the only way to relax is to lean forward.

The Airplane Headrest Comes to the Rescue!

New and innovative technology has stepped up to provide a solution to the shrinking airline seat – airplane headrests! Some of the early airplane headrests were just bulky inflatable pillows but they worked. They have their drawbacks in that they’re not adjustable, there’s no breathing space and they’re difficult to clean. The new airplane headrest are loaded with features like: 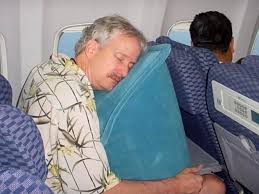 Our first example is one of the original exponents of the face forward strategy Skyrest. Founded in 2002, DAC Innovations Inc. developed the SkyRest which they say is “the world’s first travel pillow designed for use in any seat and especially typical coach class airline seats”. It is promoted as being ”very lightweight and can easily be moved around to allow for passenger traffic.” Reviews are mixed with 28% negative. It is called “too bulky” and “looks funny”. Washable covers have been added to the product line. The product is sold by P Coast partners, fulfilled by Amazon and is also available on their own website, Skyrest. 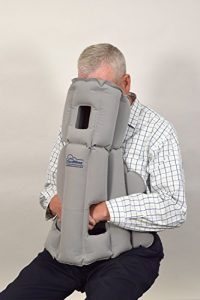 The Cloud Nine is like a Skyrest. You inflate it by blowing into the valves and its self supporting, like an air mattress that folds. The product is marketed as the “First and only vented head support cushion”. One of the benefits that it promotes is that the product “supports your face like a chiropractors table” which “allows you to breath while head and neck are supported”. The product functions in cars and trains. Little Cloud Nine gets very positive reviews even though it looks a little odd. It is available for sale on Amazon and on their web site. 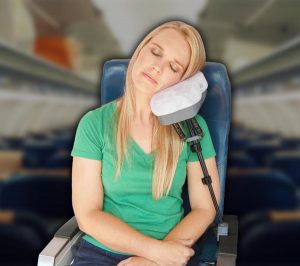 JetComfey is a new style of airplane headrest. It is not front facing and instead attaches to the seat arm instead of the tray table. The unit is very portable and the “travel pillow” is built in to the headrest. With JetComfy you rest with your head bent over the shoulder. The unit is adjustable but you are limited by the design. JetComfey has a holder for a USB power pack and pen/stylus both are extra. The USB power pack holder is a nice feature of the product. One of the issues with the JetComfey is that the headrest attaches to the armrest. This works if you are sitting on the aisle or the window but if you are in a middle seat it may cause problems because it infringes on the armrest space of the other passengers. It also defines which way you will be resting your head. The pillow surface is exposed to dust and dirt traveling through security and through the airport. JetComfey can be be purchased through Amazon or on their web site. 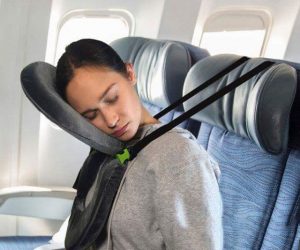 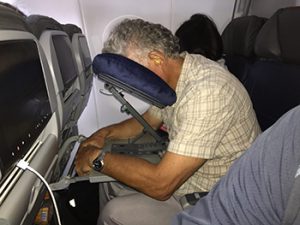 Kaz Headrest is a new and innovative airplane headrest that provides a fully adjustable, face forward sleeping experience. The Kaz Headrest has two components; a headrest platform that attaches to the table tray either with a clamp or suction cups mounted on the bottom. It also comes with a plush, inflatable neck pillow with a washable cover. The headrest platform holds the neck pillow and functions like the headrest on a chiropractor’s table. It is easily adjusted with two toggle clamps and can extend so that you can rest in an almost unlimited variety of positions. Kaz Headrest comes with a convenient carrying case that straps over your shoulder or on your carry on. Its comfortable, light weight and made of sturdy, ABS plastic and aluminum hardware. Kaz Headrest is multifunctional and can be purchased through Amazon. 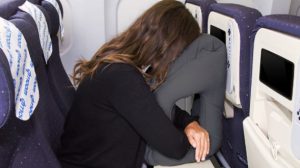 Woolip is another variation on the inflatable airplane headrest. Like the Cloud Nine and the Skyrest, Woolip inflates and sits on the tray table. It has modifications that enable you to place your arms through the center. Woolip is made of a hypo-allergenic, phthalate free material. The cover is not removable and perhaps the Woolip can be placed in the washing machine by itself. The Woolip can be used face down, under the chin or on the side. The Woolip comes in red, grey and blue and can be purchased through Amazon or on their web site.

COMFORT IS THE KEY

As travelers take advantage of more and more non-stop flights comfort becomes a major factor. On long haul flights over six hours, comfort is the number one concern after flight availability. Airplane headrests are the new solution to traveling in comfort. As the airline seats continue to shrink, passengers are finding new ways to rest during long flights. Neck pillows and the free airline pillows are being exchanged for the airplane headrest, the newest way to relax during your flight. Take advantage of the new products and technologies. Try an airplane headrest out on your next flight.